It's a lovely thing to have a set pretty well finished for Tech.

This does not always happen.

But today I was onstage doing the sort of little but vital details I always hope to be able to do forTech. Instead of painting huge - belated - items or hauling heavy - belated - furniture, I got to haul wonderfully light thumbtacks!

These tacks have become - for me at least - a bit of an in-joke.  They read so oddly in a Rehearsal Report but turn out to be an important safety issue: an actor is slammed up against the cork board.  Obviously push pins would hurt and pop loose while nice flat Safety Thumbtacks will not.  See? 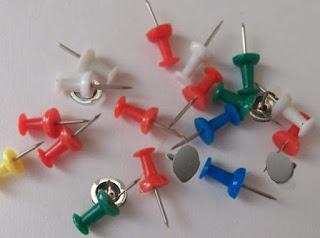 Among the other details I worked on today for this set's imaginary Break Room:

and
5) Dressing the inside of a cabinet so that, when opened, it looks lived in too.  I raided the prop room for misc. coffee mugs, glasses, a Girl Scout cookie box, and misc. hot chocolate, tea, and other hot-drink boxes... some filched from the theater's  real break room.

Each detail (which the audience will hardly notice) adds noticeably to the success of the set by making it safer, better under theatrical lights (those dark tables), or simply more realistic.

Adding a mere mop bucket outside a door can make a whole theatrical world deeper.