I always find writer/artist Austin Kleon's newsletter interesting and I usually learn something.  What struck me today was his musings on the nature of loving and caring.  It's understood that if you love something - a pet, a garden, a loved one - that you care for it, take care of it.

But it's equally true, if less recognized, that if you take care of something, you grow to love it.

It occurs to me that very long lines to vote show that we - who all love our country - have rediscovered that we must also take care of it.

By caring, by standing in line if we have to (a mere 2 1/2 hours for me here in the Dallas, 11 hours somewhere in Georgia!!!)... by waiting, voting, and helping others to get their votes in we are caring more and learning to love our country and our democracy more. 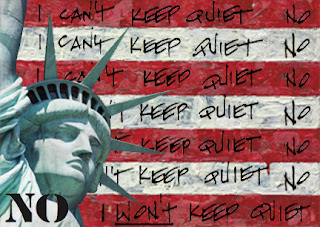 Take care of it.

Posted by Clare Floyd DeVries at 7:47 AM No comments:

In case you haven't heard this is An Important Election.

Here's the video by actor Mandy Patinkin and his wife that best catches my anxiety about this election:

Posted by Clare Floyd DeVries at 10:43 AM No comments:

I PAID MORE IN FEDERAL TAXES

THAN DONALD TRUMP DID

IN THE LAST THREE YEARS

AND THAT'S WHILE I'M OUT OF WORK

HE SHOULD BE TOO

Please, vote for the other guy.

Posted by Clare Floyd DeVries at 9:22 AM No comments: 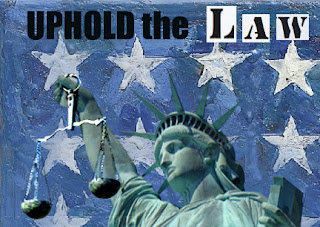 If you aren't already registered to vote, hurry up and get registered!

In Texas you must have a valid excuse to vote by mail, but early voting starts earlier than usual for this election, on October 13th (unless that mean-spirited court case goes badly, watch the news).

In Texas the important dates are:

Oct. 13 - Oct. 30, but dates and hours may vary based on where you live
You can register by mail to vote in Texas by printing a voter registration form, filling it out, and mailing it to your local election office. You can also register to vote in person if you prefer.
Posted by Clare Floyd DeVries at 9:46 AM No comments:

A scattershot kind of entry here, a few little things going on... some of them even theatrical!

1)  Kitchen Dog Theater is planning a sort of drive-in cabaret, so I got to lay out my very first auto-parking "seating" plan!  Unique in my experience.  I'll pass on details and dates of this show as I learn them.  I'd say, "save the date" but, really, where else were you going to go?

2)  Yesterday was North Texas Giving Day, when charitable contributions get multiplied by extra matching funds.  If you missed it though, I'm absolutely sure the recipients of your generosity today will still be very very grateful.  Your favorite theater, dance troupe, museum, or any other arts group would love the support in this difficult year.  And I know the food banks need help.

3)  Patio Dining - Texas weather is cooling down (though the virus is heating up a little), so patio dining is the way to go out!  I got to eat pizza hot, hot from the oven.  Fantastic.

4)  I found this video HERE at Craft in America about artist Yoshiko Yamamoto.  She makes beautiful blockprints using a blend of traditional Japanese hand craft and western printing press techniques to create nature inspired prints in a style influenced by the Arts and Crafts movement.

5)  I also found this funny and helpful video by Struthless titled "The Drawing Advice That Change My Life":

Some helpful ideas for those of us struggling with motivation and direction during these weird times.  Plus pretty dang funny.
Posted by Clare Floyd DeVries at 10:39 AM No comments:

Well, this is cheerful!

Despite the pandemic, the Dallas - Fort Worth Theater Critic Forum met (virtually) to decide their awards... and found plenty of worthy shows even in this weird, shortened season.  Read more HERE at TheaterJones.

Many good people, shows, and organizations are recognized - congratulations all!  Well deserved!

I won't shout-out all my friends (that gets kinda high school-y), but I will just note (in a totally modest way) that several shows I was involved with won awards for acting and/or direction - which the critics call "our version of best production".  The play Alabaster was noted as an outstanding new play along with another I-did-the-set new work, A Love Offering, which also got a best direction nod for Tina Parker.  Both shows were at Kitchen Dog Theater. 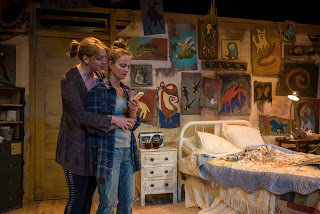 And at Stage West, director Marianne Galloway gets to wear a "best director" hat for The Lifespan of a Fact.  (That's the show that started with a shallow, white, stylized stage - just a wall really - that crash landed to reveal a highly detailed "Mom's house" living room.  You wouldn't think a play about fact checking would be so fascinating... but then this era is all about fact checking.)

The Lifespan of a Fact at Stage West - sketch by Clare Floyd DeVries
Coolest of all, the critics gave this special award :  "The primitive paintings of animals in Kitchen Dog Theater’s Alabaster — a National New Play Network Rolling World Premiere — lining the set helped create an authentic atmosphere for this play about a reclusive amateur folk artist whose work is made on shards of wood caused by a tornado that devastated her family. The paintings were a group project of the cast, crew and friends."

So my one shout-out should be to Prop Designer Cindy Ernst, who led this effort and herself painted much of the art.  Kudos Cindy! 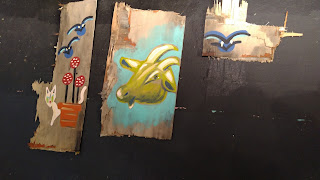 Posted by Clare Floyd DeVries at 9:43 AM No comments:

The election is approaching fast...

I would like to suggest, before voting, a little fact checking.

Try a little research using sources outside your usual news-stomping-grounds: maybe the Associated Press and Reuters plus a smattering of NPR, the Washington Post, the BBC, and other "big name" mostly print sources, since print-trained journalists have more time for fact-checking.  (Friends on Face Book or Reddit? Not so much.)

A good idea before every election, regardless of party: research and think twice

But then, Conservative Friends,  I would like to suggest - to beg - that for this one election you think a third time.  I truly believe this election is a turning point for our country.

Even if you like all President Trump's policies and can overlook his abrasiveness, I believe we need to STOP his kingly attitude that anything he wishes to do is therefore right and proper to be done.  This "law and order" president doesn't respect the law.

A small example: using the White House as a background for campaigning.

The White House belongs to all the People - of every party - so it's wrong to use it as an advantage by any incumbent president.  Also probably illegal.

A bigger example: ignoring the Emoluments Clause.  Even if you don't think Mr. Trump's business interests effect his official decisions, having conflicts of interest is just a bad idea.  He sets a precedent for the next president - who might be less honest than he is.

Most recent big example: using the Department of Justice as the president's personal lawyer.  Just today the DOJ is trying to defend Mr. Trump in a defamation lawsuit stemming from an (alleged) rape he committed 20 years ago.  Before Mr. Trump was president.  The legal rational seems to be that in denying the crime now, Trump is acting in his capacity as president.  So... is denying-rape an ordinary part of presidential duties?  I mean President Bill Clinton, for denying consensual sex actually in the Oval Office supply closet, got himself impeached, rightly condemned for lying under oath, but pre-president Donald Trump gets rape in a department store dressing room grandfathered-in as... what?  An Official Presidential Oopsie?

A lady is defending her reputation in NY court - how is this a federal case?  Is slander and/or rape Presidential Business?  Is this proper use of the DOJ?  Why are taxpayers paying for his personal legal squabble?

Could Mr. Trump also Officially-Ooopsie a murder?  A shooting on 5th Ave.?  Where does this "if the president does it it's not a crime" spree stop?

A law-bending president like this and protectors like AG William Barr are confusing to me.  What happened to taking "care that the laws be faithfully executed"?  Surely a president and an AG who believe in law enough to try to follow it would be, you know, nice?  At this point, I'd say that every Republican in office (except Mitt Romney) has, to some degree, enabled this law-breaking.  So I will not vote for any Republican in this election.

Do you think this is proper behavior in public servants?  Do you want to vote in more of it? 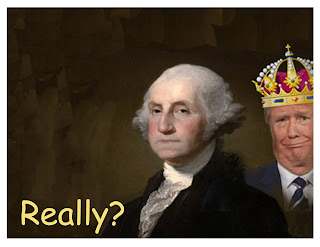 So, please, as a favor to your country and your fellow citizens, please research and think twice before voting for anyone...

...and three times before voting Republican this time.

Posted by Clare Floyd DeVries at 8:11 AM No comments:

Taking a vacation - even though not traveling away from home - is still a Nice Thing.  Let's appreciate the Nice Things in life in this difficult year.

Several pleasant or absolutely wonderful! things have happened here: most important, an addition to the family! This is too public a forum for details of such personal rejoicing, but it's comforting to know that life really does go on.

A smaller example: last night brought rain and with it coolness to dry, hot Texas - we celebrated under the porch roof of a favorite restaurant, watching the blessed rain.

Other rejoicings I can share here are the enduring joy in art.  Now that museums are cautiously reopening, it's possible to visit old favorites.  (I'm not the only one treasuring this freedom, the art critic for the Washington Post sounds giddy too,  HERE.)

The Kimbell Art Museum in Fort Worth is a good stand-in for the Met locally... 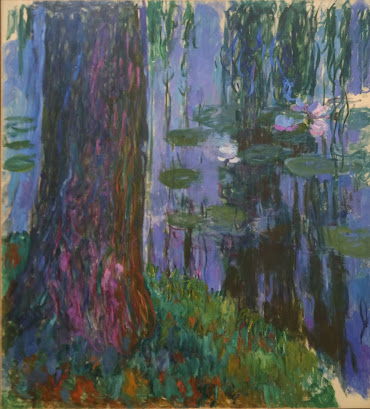 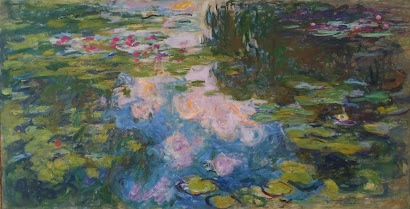 These paintings by Monet are all the more touching and lovely now that I realize they were painted during WWI.

Maybe that explains something I'd always found disturbing about late Monets - the way these serene images are made up of fierce, even violent and frenzied, brush strokes.  I knew the artist was losing his sight as he was painting these, but it seems that the publicly shared horror of these years of war may have added to his personal pain during this creation... an artist losing sight and deaths of young poets are in the depths under those floating lilies.  Channeling pain into beauty.

Art is a miracle.

Posted by Clare Floyd DeVries at 8:27 AM No comments: