Looking through the stats for this blog, I've discovered that a good few visitors find their way here by Googling TM "Boeing Boeing set design."

I've designed two versions of the show - for Circle and WaterTower theaters - and although those two shows had the same text, same director, and most of the same cast, the two very different venues demanded different sets... 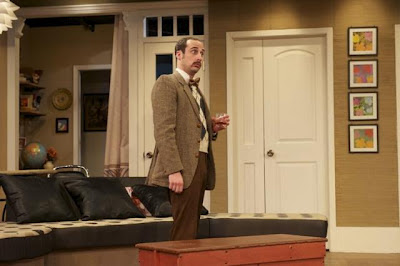 My first version of Boeing, Boeing... on a small thrust stage about 25' wide by 16' deep (in front of the proscenium), by 9' high.  My idea here was that this was a penthouse/rooftop apartment with views of Paris, renovated by the architect-character . 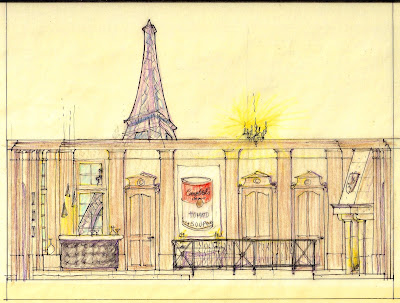 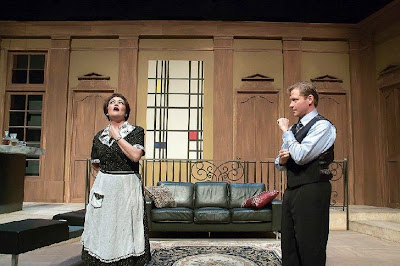 But how many other ways can there be to design what's basically a box set living room with 6-7 doors?

So I thought I'd Google it myself.

Immediately, I found a fun video for a production of the show at Phoenix Theatre HERE.  (Since these videos and photos are all copyrighted, I daren't display them: please click on the links.  Though this ought to be "fair use" as criticism: compare and contrast, kiddies!)

Where my design impulse was to emphasize the '60s Parisian and architectural nature of this architect-character's apartment, the designer of the Phoenix Theatre's version, Richard Farlow, emphasizes the airplane motif and adds colored lighting and a piece of switcheroo-set-dressing-comedy to "decorate" his set for each stewardess.  Clever!

Many other designers used a variation on French paneled walls, with the Hartford Stage's version by David M. Barber perhaps the most handsome example.  French and - to a much lesser extent - 1960s seem to be the leading motifs.  I'm surprised so few of these designs attempt any views of Paris; though, on my own sets, only selected seats saw any view since this is, basically, The Lotso Doors Taking Up All The Wall Play.

The Papermill Playhouse production - designed by Ray Klausen -  besides many doors, had a neat silhouette of Paris above the apartment and nice moldings (though I kinda hate the typical-theater-railings).

A production in Melbourne used an elegantly curved-wall set, again all doors, no views.

I'm also a little surprised that no designer went nuts with the '60s.  I had touches - the art, a few details and colors - but no one seems to have carried the period style much further.  Possibly this is because of the price of large pieces of '60s decor?

Posted by Clare Floyd DeVries at 10:19 AM