There's been a dearth of film crit here lately... mostly because there have been few movies I wanted to see.  But here are the recent viewings:

The story?  Well, without Spoiling, there is one enormous logic hole: why do these invading aliens... No.  That would spoil it.  Rephrase: why is Tom Cruise alive?  An explanation is given in the film, but after a minute's consideration the viewer has to conclude, "Bunk."  Nonsense.  Okay, second hole.  Why (assuming Tom Cruise lives), why does his maintenance-man character get such deluxe digs? That gorgeous pool? 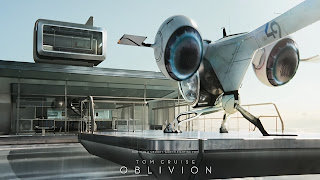 But the real flaw to the film, for me, the real Invasion, is not by scripted evil aliens, but by Hollywood Star Power.  Used for evil.

The Tom-Cruise-is-a-Star thing invades every aspect of what could have been an effective sci-fi film.  Cruise (barely his character) is built up in every possible way: he gets not one but two adoring and beautiful women who hang from his arm and his every word, lips trembling, tears glistening; before the end you see Cruise getting the obligatory adoring child too.  Of course he earns the respect of the doubting Rambo-style second-in-command cliche' and even of Morgan Freeman (who once played God, remember?).  Freeman's rebel leader calls Cruise "our best," our referring to the entire Earth, naturally.  The plan to save Earth that Freeman's character begins can, of course, only be completed by Our Hero Cruise through heroic self-sacrifice.  He's the Star.  Also, he's Such A Darn Hero that he actually performs a coupla miracles along the way: one, a small miracle of handymanhood with a stick of gum ('cause he's our all-American Joe at heart), the other in showing up for end credits.

And did I mention the women?  The attraction of Cruise's aw-shucks heroic sheer manliness is such that, in the most tasteful way, both women throw themselves at him.  The pool comes in handy.  Plus there is an I-kid-you-not actual crotch-shot of Cruise with a sleeping woman in the background.  I haven't seen such a HINT OF SEX since Captain Kirk put his boots back on.  So shameless and corny I had to choke on my popcorn in the theater.

But I'll watch Oblivion again on DVD for the gorgeous world created.  Plus, at home I can point and laugh.

Phew!  After that the story-telling and ensemble of The Hobbit make a refreshing change.  Loved watching this in the theater, loved  rewatching it on DVD.  I'll buy the expanded version that's due out in the fall.  But even if you're not a rabid Lord of the Rings fan, as I am, the film is old-fashioned in the right way - it builds a beautiful fictional world in which to tell a good story in an entertaining way.  Unencumbered by Star Power.

My earlier post on The Hobbit HERE.
Posted by Clare Floyd DeVries at 12:20 PM