There aren't so very many architects who qualify as saints or martyrs... but perhaps this brave woman in Karachi should be nominated:

On this morning's NPR I was touched by the story of Parveen Rehman.

Recently assassinated by motorcycle-gunmen, she was the director of the Orangi Pilot Project, a non-profit organization trying to bring basic services and improved conditions to the poor of Karachi, many many of whom live as squatters in unsafe, illegal, and in every way sub-standard housing.  Her organization helped communities learn to maintain their own environments, including sanitation, health, housing and critical micro-financing.

Ms. Reman had studied architecture and worked for a famous architect on the design of a luxury hotel... until, one day, she asked herself, "Who is this serving?"  She walked out the door without her paycheck.  Found a job helping the poor.

For this she is gunned down? 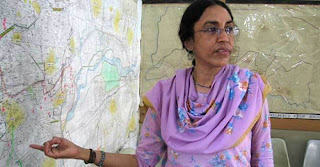 According to a BBC article, it is presumed that, in investigating land speculation, she learned too much about local criminal groups' real estate activities - they silenced her.