Not Reviews: Penelope and King Lear

I've been on a seeing-other-peoples'-shows binge!

Penelope by Bourdell at the Kimbell Art Museum

Penelope:  Wednesday night was Undermain Theatre.  Penelope may be a perfect Undermain show...  it has their unique combination of erudition (the story comes from Homer's Odyssey), brilliant acting (all stand-outs in roles with both repartee and long monologues, oh! and tricky Irish accents), social commentary (on male competition mostly), odd comedy (Gone with the Wind and the Grassy Knoll make hilarious cameos), and unexpected, vivid violence.  And the set's cool.

I really enjoyed the play.  It's a thrill to see actors get their teeth into something.  And, as a set designer, I really, really liked the beautifully rendered empty pool in which these bachelors were kept waiting.  Gorgeous scenic painting! (It's hard to paint good aging and wear.)  The pool bottom became almost a character - certainly a landscape with which the characters grappled.  The cool, curtained pool cabana above where Penelope lounged - watching the guys on CCTV - was great contrast.  (Tiny, tiny quibble...  I wish those white classical columns had had faint mortar joints painted on, so they became "stone" instead of Home Depot wood.  But you could also argue they were more pristine without.)  Costumes were also perfect.

Another interesting aspect of Penelope is that this is the very first dramatic performance onstage at Dallas' new Performing Arts Center.  It was, in every sense, ON-stage, because Undermain placed both the two-story set and the audience seating on the stage proper.  (This play could never fit in their basement home.)  The auditorium was hidden behind the grand fire drape, but I took a peek - a beautiful room!  I'll look forward to sitting there some day.

All in all, a great kick-off to this new Dallas venue. 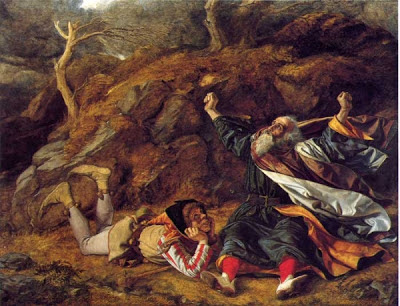 I have mixed feelings about the show though.  Maybe I'd just heard and read too much for too long about the majesty of this play Lear, about the great cathartic grandeur etc. etc.  I hate to sound like a schlub, but... not so very much.  For me.

In part this un-awedness was the influence of the set in the first act, a high room with a pair of columns and a grandish pair of doors, built of plain, stained-streaky plywood with under-floor construction exposed and a rickety suspended ceiling (that occasionally quivered).  The volume was grand, hinting at palaces, but construction suggested temporary.  No doubt this was All Metaphorical... but also deflating of the King's Dignity even before you met him.  Ditto modern costumes.  (Fine, except for Cordelia's dress, which I hated for its color and its cling.)

Then the King entered...

Now the actor handled his dialogue very well throughout - in a killer part! - but, on his entering, I just didn't sense majesty.  I did pick up conceited self-importance.  But not the C. S-Imp. of a king so much as the C. S-Imp. of that obnoxious guy on the Home Owners' Association board.  You know the one.  The retired guy who gets petulant when his idea to outlaw orange window blinds is rejected.  Him.  The (at this moment) rickety set and everyday dress did not do the actor any favors at this moment.

So, for me, the tragic fall of Lear was lessened by this lack of height to fall from.

Now, the set came into its own in the storm and mad scene.  Terrific!  Dramatic!  Real rain!  (Always cool.)

And again, the King entered, this time with the terrific "Blow, winds!" speech.

Part of this was the loud rain.  (Real rain: always cool, always noisy.)  Maybe, because of the real rain,  actors weren't wearing mikes lest they electrocute themselves.  The result was that Lear's voice - always a trifle light for my taste - was now almost inaudible.  You could feel the audience leaning toward the stage urging their ears to catch his words.

Couldn't a mike be built into that door frame?

Lear and the other characters came onto the stage and into the rain.

All very effective.  Gorgeous.  Mad, splashing water with his hands, Lear was poignant.

The pragmatic stage designer in me and my inner-architect spent the rest of the show worrying about that much water on stage.  I worried about actors' footing on wet surfaces and, in a fight, on the duckboards placed over the wet.  I worried about long-term effects of water on plywood: the swelling, delamination, and splinters that will impede set operation and actors' safety.  I worried about wet, cold actors.  Are they heating the water?  'Cause that helps.

At intermission, stage hands dried everything with towels.  Obviously water had made its way to lower levels of the set and (I'd bet cash money!) will find a way to the stage floor eventually.  Water is insidious.  I've done several "wet" productions and no matter how careful you are in design and construction (and I'm a fanatic), water will do damage.  After last night's performance I dreamed of flooding.  Sad.  True.

Back to the show: some excellent acting.  I particularly liked the triangle of Gloucester and her two sons.  The three daughters of the King.  The Fool and his costume - seersucker - were perfect in the context of this modern dress production.  Really did like the set during the storm scene and afterwards and, to be fair, it "played" beautifully from the first.  Maybe, for me, it just needed a lick of gold paint to go with the plywood. See what you think.


You cataracts and hurricanoes, spout


You sulphurous and thought-executing fires,


Singe my white head! And thou, all-shaking thunder,


Crack nature's moulds, an germens spill at once,


Posted by Clare Floyd DeVries at 8:14 AM