We already have the Dallas Museum of Art, at the head of Flora Street, the Symphony, the Opera Hall, the stunning Nasher Sculpture Center, and The Wyly Theater - home of the Dallas Theater Center.  Now there is this new 750 seat space, the Dallas City Performance Center.

But here's the catch:  although the local theater community was in on discussions about how to design - what to design - for this new building... It doesn't seem they were listened to.  750 seats are just too many for most small theater groups to fill.  The Bath House Cultural Center seats about 200, which is about right for small troupes or edgy material.  These groups really could use a larger venue for more commercial or broader appeal shows and as they build audiences, yet the jump from 200 to 750 is just too far.  What these groups need is someplace with 400-500 seats.  (Can't just half-fill a hall - it kills a show to have a half-empty house.)

Of all the groups I can call to mind, only Shakespeare Dallas presently has the pull to fill the new venue.  Air conditioning may be a powerful draw too!  Wow.  But what about the picnics?  (Looove Shakespeare picnics!)

What our small theater groups actually want, are the up-to-500-seat black box theaters of the proposed Phase II...  Given the present economy, however, Phase II will be slow a-comin'.  Those black boxes would have been a more nurturing next-step in developing small theater troupes into viable larger ones.

Here's the other catch with the new Big Venue: big rent.  My understanding is that rent on the Bath House is in the neighborhood of $75 a night.  The new venue asks around $1400.

Faint whiff of a problem there?

For months, years, I've heard - and shared in - grousing about the dunderheadedness of the new theatrical venue.  (And also heard rumors that high rent for that other new theater venue, the Wyly, is crippling the finances of the Dallas Theater Center.  I hope that's not true.  But high rent IS an art-killer!)

Reading today's paper, it seems this mismatch of new-venue and user-needs may be resolving itself in a way I never expected:  a new musical group is born!

The Dallas Chamber Symphony has been established - inspired - by the nature and good acoustics of the new City Performance Center space. 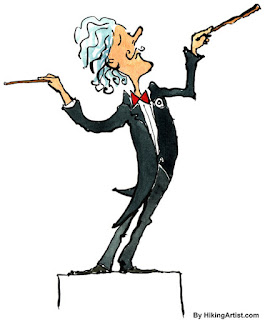 Bureaucrats and committees can decide what they will.  Nay-sayers (who? me?) can carp.  Yet artists will find a way to work - around, in spite of, even sometimes using dunderheaded mistakes.  The city thought it was filling in an existing need by existing theater groups - missed that target! - yet, inadvertently, inspired a whole new music group.

"Build it and they will come," indeed.

I think it's wonderful.  All the best - break a leg! - to this new Chamber Symphony.

Maybe the City Performance Center will turn out to be a good and financially viable home for music?  Perhaps dance?  There will certainly be some theater...

Please prove me wrong!  I'll happily eat all my words and doubts.

Maybe we should start collecting nickels for those black box theaters in Phase II?
Posted by Clare Floyd DeVries at 7:56 AM