Let's goof off at the movies!

I absolutely love that we live when films are on tap for viewing at will.  Because I grew up in the day when, if you didn't catch a movie at the theater, you might never see it.  Even if you did see a film on first run and loved it passionately, you might never see it again.  Or only at 2:00 a.m. one day, one year, years later.  VCR home taping technology was as big a breakthrough as printing books, as far as I'm concerned.  Revisit a much-loved film?  Wonderful.

Consequently, here's a series of my takes on various films - new, old - that I've watched lately, either in the theater, on Netflix, or otherwise on that big screen hogging my living room.

Robot and Frank - A charming film about aging set in a  near-future that you barely notice happens to be science fiction.  Robots, right?  The retired guy - beautifully played by Frank Langella - reluctantly accepts a robot home-care assistant (he calls it "Robot"), while the town librarian - lovely Susan Sarandon - accepts robotic help at work more gracefully (she calls hers "Mr. Darcy").  Thoughtful, charming (did I mention charming?), well-acted, and often funny.  A few nice surprises.  And - Easter egg bonus! for s/f fans - the actress playing the daughter is Liv Tyler AKA Arwen.

Sherlock Holmes: A Game of Shadows - No nice surprises here.  Well, okay, faces you're glad to see.  Otherwise, the actors give their all, the sets, costumes, effects, etc. all well done... yet a deeply stupid movie that misses the point of Sherlock Holmes.  (So did the first film, but somehow that was more fun.)  SPOILER... I absolutely hated the way The Woman - Irene Adler - is swatted like a fly.

This sequel joins my personal list of sequels-that-shouldn't-have-been-made, right up there with Indiana Jones IV and Pirates of the Caribbean IV, both also filled with clever stuff in service of a bad idea.  Skip Sherlock Holmes the Action Hero and go watch episodes of the BBC's Sherlock instead.

Mirror, Mirror - Julia Roberts, Snow White...  A dud.  Why?  Besides the lame story?  But a definite dud.  However, seeing Nathan Lane in a cockroach costume made it worth my time.

Wrath of the Titans - Another mythically good story told with terrific actors and at great expense of time, trouble, talent, and cash... also somehow dead on arrival.  Hard to say why.  It's not lack of trying.

Why do movies fail?  Well, a film (or a stage production) is a big clanky walking-machine with about twenty legs, all full of rusty gears and shiny new ones, that barely mesh, which nevertheless tries to dance for your amusement.  Art is mysterious.  Some projects just magically click! and dance and leap!  Others just never do.  Some films turn out to be stumble-bums no matter how hard their mothers love them.  So have patience with bad movies, knowing that a good one needs magic and just flat luck to succeed.

Ruby Sparks - Charming and quirky.  It's the Pygmalion and Galetea story of an artist who falls in love with his creation.  Romantic... but not what you expect (whatever you expect, going in).  This film is also funny, sad, kind of disturbing, lonely, meta-fictional to the max, quirky, and hard to describe without spoilers.  Go see for yourself.  It reminded me of Stranger Than Fiction, another worth-while movie about a writer and her character.

There you go: a couple duds (though with moments of worth, because their makers loved them, whatever the luck was) and a couple little jewels that went click! and dance. 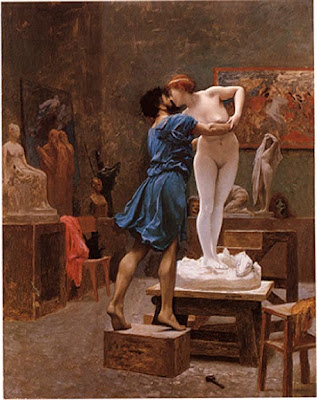 Pygmalion and Galatea by Jean-Leon Gerome, public domain image from Wikipedia
Posted by Clare Floyd DeVries at 8:13 AM

Email ThisBlogThis!Share to TwitterShare to FacebookShare to Pinterest
Labels: film, Mirror Mirror, Pygmalion and Galatea, Robot and Frank, Ruby Sparks, Sherlock Holmes Game of Shadows, Stranger Than Fiction, why do movies fail, Wrath of the Titans