I promise this won't happen often... but I have to link to a funny cat video.  Really.

But here's the deal: this little black & white flicker of film about Henri is a clever satire of cats, humans, the-tragedy-of-life-as-we-all-know-it, and (not least funny) French Cinema of the most pretentious, um, serious and artsy sort, complete with subtitles.

(I'm told the narrator's accent is so thick that actual French speakers understand better with the sound off.  But do cats have the right shaped palette to speak French properly?  Their English is certainly sub-par.)

This little gem has everything I most respect in, um, Art: it's made for love and learning (you see the filmaking improve between the original Henri and this Paw de Deux); it's made with modest means - using the limitations even as part of the story (especially at the end!); and it has a point of view. 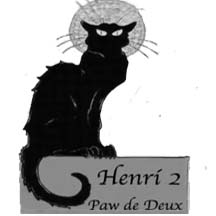 Salon calls this "Officially the best cat video ever."   Henri Paw de Deux just won an apparently prestigious LOLcat-film award.  (They have those?  Sure.  There's an award for everything.)
Posted by Clare Floyd DeVries at 7:26 AM