Catching Up... and Getting Ahead

Well, it's been the usual nuts around here.

At the moment I'm frantically trying to catch up on construction drawings for WaterTower Theater's production of Bread, a new play by Regina Taylor.  (Decisions got a little delayed, as they tend to on premiers, but we're cooking now.)

I've got a couple shows on the boards:  This Random World at Circle Theater and The Gazebo at Mainstage Irving Las Colinas.  Check 'em out!  Coming up soon is The Royale at Kitchen Dog Theater.

Above and below: The Gazebo by Main Stage Irving Las Colinas
Sketch and photo by Clare Floyd DeVries

Outside of theater I've been doing a little reading:  dipping into the newest translation of Don Quixote (very lively) and a collection Famous Speeches (less so), and just finishing The Happiness Hypothesis by Jonathan Haidt.  Fascinating!  Hard to describe... more or less a look at the philosophical basis for a moral and happy life merged with related recent science.  Sounds dull?  Not so!

TV and film? I've been enjoying the latest Star Wars and the shows The Crown and The Good Place.

But how about my latest and most terrible hobby you ask?  (No, if you have sense you run because that hobby is Politics.  Yeesh.)

If you're not yet registered to vote... go sign up today!

Texas' primaries start March 6th.  And this year in Texas there are actual CHOICES!  So go pick someone you like, huh?  Primaries are important.

Look at the Dallas News' Voters' Guide for who all will be on your primary ballot.  Having actual choices means that you'll have to do a little homework in order to vote intelligently.

Let me recommend one candidate for your consideration: 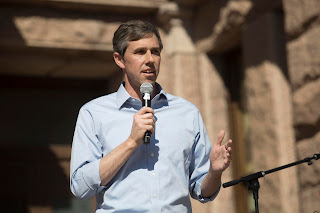 Here's why I like him enough to advocate for him:

1)  He's running against Senator Ted Cruz.
2)  Beto refuses to accept PAC money.  Believes in term limits.
3)  He's eager, enthusiastic, and tireless.  He's been driving ALL over the state in his pickup, meeting with regular people, talking with them.  He's 45 but seems younger, partly because he's tech-savvy... and younger, tech-savvier opinions in the Senate can only be a plus.
4)  Beto has experience as US Representative for El Paso (so with real knowledge of border issues - did I mention he's fluent in Spanish?)
5)  He's pro-veterans in a practical get-them-help- kinda way.  I like the practicality.
6)  He believes in - and practises - bi-partisanship.  I don't care what party he belongs to, but he believes in the things I like about the Democratic party... like health care.
7)  Beto seems like a genuinely good guy.  Nice family.  Appealing.  All that electability stuff.
8)  Plus he was once a punk rocker.  Not sure why that appeals to me... maybe because that's unstuffy?

First bumper sticker I've ever put on my car.

Please vote.  Your country needs you.


Posted by Clare Floyd DeVries at 8:00 AM