Today the anonymous-apartment-levitating-limbo set for Kitchen Dog Theater's production of Se Llama Christina is getting closer to finished...  streeeeetching the fabric "wallpaper" over the flats and frames.  The fabric is necessary partly for texture, but mostly because it hides secrets...

As soon as we get this fabric stapled in place, we'll cut away enough muslin to reveal the windows on the stage left (or SL) wall.  And eventually I'll add paint, remains of wallpaper, and years of landlord-neglect.

Here are the Dogs at work (I'm the one behind the levitating baby's crib, almost under the ladder, pulling on the far DS SL corner.) 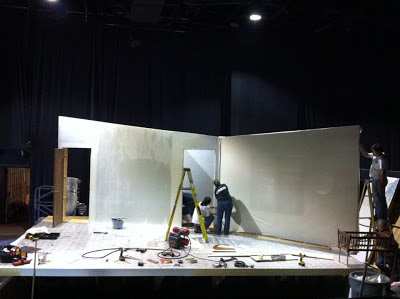