It's been holiday film-n-book season here, so I have a few to catch you up on:

Le Miserables, the Movie:  I'm in the possibly unique position of not having seen the stage version of this famous musical first.  (Sad, but true.)  And it's been a hundred years since I read the book.

So I was able to watch and listen without preconceived ideas.

I was impressed with Hugh Jackman as Jean Valjean and with Anne Hathaway as Fantine.  I liked the portrayals of Cosette and Marius... waffled a bit about Russell Crowe as Inspector Javert.  Now, I am no musician, so please take my comments with whole wheelbarrow loads of salt, but it seemed obvious that Crowe is just not the singer the others are.  I did, however, warm up to his Javert as the movie went on.  I really enjoyed Jackman, though I did feel - notably in the song where he prays for Marius to survive the barricade to return to Cosette - that some songs made his voice sound kinda thin and strained - no idea if that's the fault of voice or music.  Fantine's big song, however, just devastated me.

Other roles...  Sacha Baron Cohen was fine, but will someone please take Helena Bonham Carter's fright wig away?  She's played that tousle-haired harridan once too often.

The story of Le Miserables is affecting.  Seen at the end of a gray winter day, my companion found it all too depressing, but I enjoyed the experience.

The Silver Linings Playbook:  This film, which has been out for a while now, played to a packed audience.  Word of mouth is wonderful.  This isn't especially my kind of movie (I was afraid it would turn into a mental-health-issue-of-the-week TV special), but I warmed to the characters and, by the end, really liked the movie.   Parts were funny and all was true to life.  Performances were lovely. 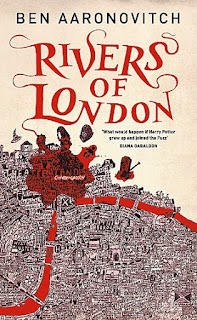 I took author Lois McMaster Bujold's recommendation for a good book... and am I ever glad I did!

The Rivers of London by Ben Aaronovitch (retitled Midnight Riot in the U.S. for no reason) is a terrific urban-fantasy novel.  It starts as a young London police officer interrogates a ghost... and grows into a great set-piece at the Covent Garden opera.  The author creates a wonderfully quirky mythology for the ancient city that reminds me a little of Neil Gaiman's Neverwhere.  (I have no higher praise).  But where Gaiman's novel is darkly humorous, Aaronovitch's is humorous and sometimes dark.  The book's hero himself is aware of the J.K. Rowlingness and Terry Pratchettness of his material and - with the reader - has fun with that.

I ran out (well, virtually ran, I actually urgently e-purchased, downloaded, and e-gobbled) both this book's sequel Moon Over Soho and its sequel Whispers Underground.  Both novels are individual (i.e. not copy-cattish of the first), both satisfying.  Highly recommended.
Posted by Clare Floyd DeVries at 12:27 PM