That's what an actor remarked to me as we watched a bunch of volunteers sweeping up the last of the sawdust.

The strike for The Beauty Queen of Leenane was almost over.  We were waiting on the sweepers before repainting the bare stage floor black.  Watching those push-brooms make the last pass I reflected: theater IS like sand-painting.

You put all this work, all this care into a production... and then it's over.  It's swept away.  It's gone.

It took me a couple years to reconcile myself to this fact.  But I'm mostly okay with transience now.  I do think it may be a little braver than usual that theater people can be so open about and at peace with the idea that you throw your work out there and then it disappears like a soap bubble.  Because the human urge to create a monument is strong.  But, in the long run, nothing much really lasts does it?   Even the pyramids aren't what they once were.  Even they,  from a planetary viewpoint, are temporary phenomenon.  From a galactic view, so is the Earth.

Everything is a soap bubble. 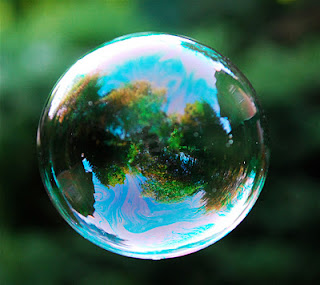 Today?  My first meeting on a new show, The God of Carnage for Circle Theatre.

Early posts on the Beauty Queen strike HERE or on this idea of transience HERE.
Posted by Clare Floyd DeVries at 6:06 AM