I'm reading the Journal of Benjamin Henry Latrobe - the architect who designed and built so much of the Capitol in Washington D.C. - and I found this quote:

"The architect indeed requires all the imagination of the painter.  The building exists in his mind before it is sketched on paper, and if the operation of design is the same in other heads as in mine, arrangement, construction, and decoration are attained so simultaneously that I seldom materially change the design first elaborated.  But when imagination has done her duty, her aid is no longer wanted, and to a moment of enthusiasm succeed months of dry mechanical labor in drawing and the more dry and tedious application to it of calculations.  When the castle in the air has been made to descend into the office, and such constructions in writing and drawing shall guide the hard hand and iron tool of the mechanic, imagination is busy only to distract.  To execute such a building as the Capitol without relaying a brick or altering the shape of a single piece of timber or of stone, a competent knowledge of eighteen mechanical arts is necessary, a tolerably perfect command of every part of mechanical science, and, above all, a very correct mastery of accounts.  Where these are not combined, the architect is the slave of his mechanics; he is either ignorant of or must wink at their deceptions for fear of exposing his own ignorance, and alteration and experiment constitute a very considerable portion of his expense."

Present-day architects have plenty on their plates, srtuggling not to be "slave" as Latrobe puts it, mainly to building law, legislation, and codes, on top of the actual architecture gig itself, which is the same "moment of enthusiasm" and "months of dry mechanical labor"; but now we have become responsible for coordinating the efforts of dozens of experts like structural, mechanical, and electrical engineers and specialist suppliers and installers of high (and low) tech components like roofing or glazing systems or office work stations, as well as working with the general contractor or construction manager, whereas Latrobe was it.  Architect, engineer, construction superintendent, inspector, the whole design and administrative division of a huge construction project. 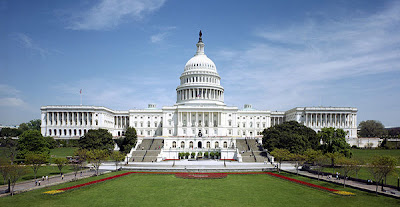 BTW, Latrobe's version of the Capitol had a lower, flatter dome, arguably more in keeping with the scale of the building and its central pedimented entry bays.  Personally, the tall dome is so iconic that I can't imagine not having it, however overpowering it (once you really look) obviously is.  There's probably something metaphorical in that...

Latrobe's Journal is available for free or very cheaply as an ebook.

Posted by Clare Floyd DeVries at 8:11 AM