In the crunch, in the last days and minutes of finishing a set, many things happen at once...

Carpenters build "finish" details there was no time for earlier, but also repair Really Big Stuff that, for some annoying reason, isn't working properly, and they add missing elements, like masking.  At the same time, painters base-coat the new "finish" stuff as soon as carpenters place it, while continuing to paint everything else.

It is a wise theatrical convention to try to paint a set in stages. First a base coat on all raw wood.  (Under stage lights raw wood glows like an Ain't-Finished-Yet sign.)  Next, as time allows, scenic painters make sure every set piece gets a sort of broad-brush version of its final treatment - colors, texture, and some delineation of any image.  In The Mystery of Irma Vep, this would be the outline and base colors of the Sphinx's head on the Egypt wagon.  As soon as possible, this fast version is improved with the final finish - perhaps what was a flat color gets scumbled in several shades or, for the Sphinx's face, careful gradations and shadows would be added. 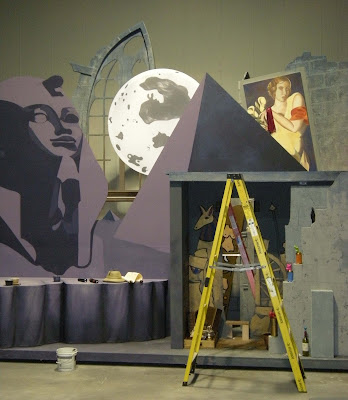 
In this photo you see the Egypt wagon getting its finish painting (the Sphinx's eyes will be revised, for instance) with, behind the wagon, tall parts of the main Sinister English Mansion set and its Portrait # 1.  (Those are props and set dressing sitting around, in the way, not the painter drinking lunch.)

But because carpenters are still building, any neat three-step scenic painting process is continually interrupted to hop back to slap paint on sudden new wood or to touch-up a finished surface marred by later work.  Also, special projects are finished, like dashing through, at a single sitting, that second portrait that everyone's been only pretending to use for Act III.

Late-stage set building and painting (and dressing! and furnishing!) is all about juggling priorities until - if lucky - the set is perfectly finished or - in the real world - the audience sits down.

The hard deadline of Opening explains the painting strategy: if, at any moment "Places!" is called, no scenery will look raw and it will all be (roughly) at a matching stage of readiness.

The Mystery of Irma Vep - amazingly enough - is going to be about done.
Posted by Clare Floyd DeVries at 10:03 AM