Opening and Other Up-Dates

Saturday night was the Opening for See How They Run at Circle Theatre in Fort Worth.

A very funny show.  The audience howled and clapped - adding ten minutes in laughter, so that actors had to find ways to vamp until their next line could heard.  A nice kinda problem!

I'm pretty happy with the Tudar style, half-timbered set.  There had to be a few minor compromises on the details of this one due to real-life-situations which took up some of the builder's time, but nothing an audience would notice.  It happens.

I spent the afternoon before opening in Fort Worth.

The Kimbell Art Museum had few visitors (they're between big shows and knee deep in construction), but part of their wonderful permanent collection was on display, so I was happy to visit favorites like Elisabeth Vigee LeBrun's self portrait and Matisse's L'Asia.

Ancient pieces are currently featured.  There's a lovely bronze head with amazingly curling hair.  A lovely crouching marble Venus.  A few red-figure vases...  How, I wondered, could the Greek vase painter of 2500 years ago make the gory death of Pentheus so beautiful?  Even his dismembered torso (partly hidden by the display stand) has dignity and beauty.  You can see it below, or better on the museum's website  HERE  (Click on the Pic for a detailed close-up.)  There's a wonderful crispness and richness to the lines that define the characters in this tragedy and a balance between linear and solid-area painting that I admire.  Decorative ceramic painting is an unforgiving art - it's hard to fix a mistake - so the sure hand here is remarkable.

In many ways this illustrated story is similar to a modern graphic novel.  The original viewers would have known the story and not needed the museum's cue card explaining that King Pentheus had forbidden the worship of Dionysus (or Bacchus, the wine god and the king's own cousin).  He forbade the women of his kingdom (his aunties and mother included) to take part in these rites.

You can imagine a Greek god's reaction.

Pentheus's mother only recognized her son's head on her sharp stick after the wine induced frenzy faded.

The longer you look at and think about this scene of the insulted god Bacchus's revenge, the more disturbing this beauty is... 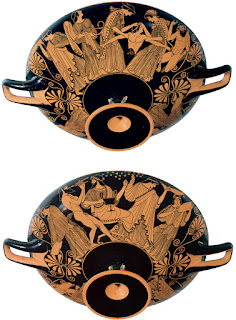 The Death of Pentheus, Kimbell Art Museum, believed fair use

Construction of the new addition to the Kimbell Museum is proceeding.  New concrete work is finally above grade.  A few long beams have been delivered and set in place.  Wrapped in such heavy black plastic, I wonder whether these are wood beams?  Or pre-cast concrete unusually well protected?  You can start to see the massing of the new building versus the existing one now and, so far, it seems as if the original will not be overwhelmed...  we'll see.

I do hope, once the new building is done, there will be some repairs to the existing Kahn building; I spotted quite a bit of damage to the too-thin travertine of its steps and porch floors.

After this museum visit - pizza!

I was happy to see one of the theater critics having a good meal at the same restaurant.  I have long advocated for DFW actors and designers to chip into a special fund to make sure critics get a good meal and a drink before coming to see a play - the last thing we want is a hungry/grumpy critic.

A grumpy critic might write a review a little too much like that ancient vase-painter painted his gory picture!
Posted by Clare Floyd DeVries at 7:25 AM